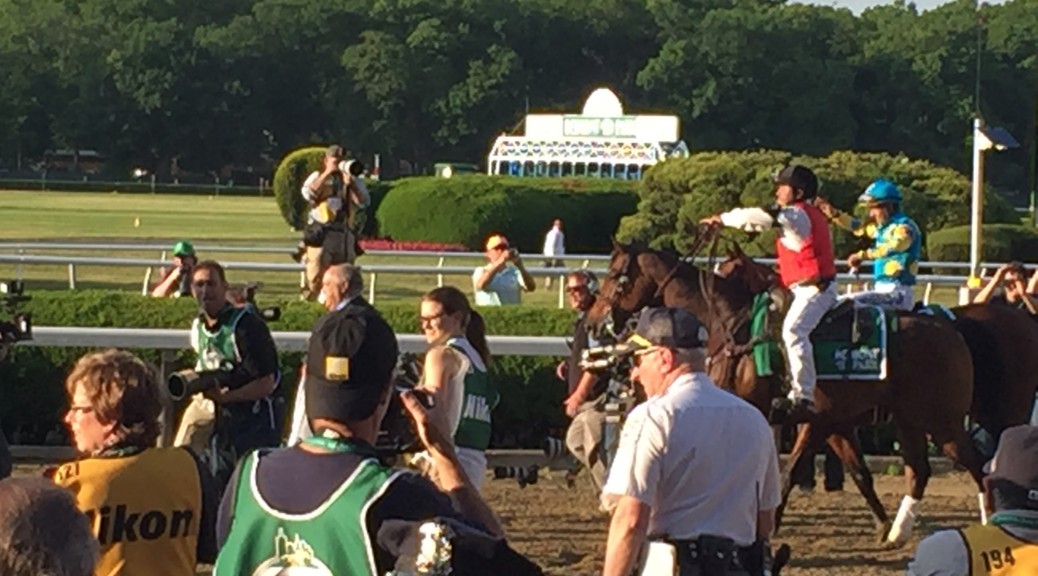 Happy Belmont Day. There’s nothing quite like Belmont on a year with a Triple Crown possibility.  Unfortunately, that is not the case in 2017.  But putting aside that disappointment, aside from the Breeders Cup, this is the best card of the year.   10 stakes races, 9 graded, 6 Grade 1’s.  Plus, the return of Champion Songbird.  And maybe most exciting—tons of wide open races offering value plays all day, including the Belmont itself, which could yield a big payout.

Here are our thoughts. Sorry they are brief but with Friday action and ten stakes, we ran short on time.  Good luck and follow us on Twitter @thorobros for updates live from Elmont.

END_OF_DOCUMENT_TOKEN_TO_BE_REPLACED 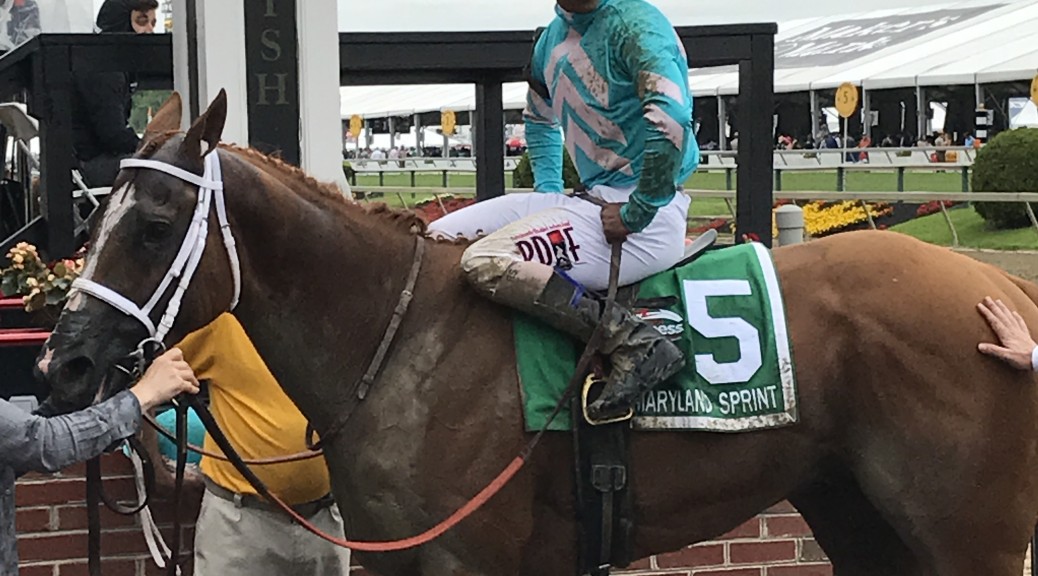 Not to sound like a broken record, but we love the “day before the big day” Friday cards. Breeders’ Cup Friday, Oaks, and Black Eyed Susan Day are long time Thorobros favorites.  So we could not be more excited by NYRA’s continued development of the Belmont Racing Festival and in particular, the Friday card.  And this year’s is their best effort to date.  Full fields all day, highlighted by a late Friday afternoon Happy Hour all stakes Pick 4.  It offers the perfect appetizer to a huge Saturday of racing at Belmont.   In our typical fashion for these Friday cards, we offer our thoughts below on the late Pick 4 all stakes sequence.  With first post of this sequence at 4:42, it’s the perfect opportunity to grab some friends, grab some beers, and fire some Pick 4 wagers.

END_OF_DOCUMENT_TOKEN_TO_BE_REPLACED

Aaaaaaaaaaaaaaaaaaand good afternoon everybody! How are you today!  We are back with everyone’s third favorite Thorobros annual column, the Derby Party mint julep guide.  You all will recall where we name 5-7 mint julep-type drinks after horses in this year’s edition of the Kentucky Derby.  And we make a few lame jokes in the meantime.  And I’ll save you the time to ask the question – yes the jokes are funny to us.

This was a tough year from the perspective of horse names that work for clever juleps. As usual, we tried our best for you, our 5 readers.  As usual, if you actually try any of these ridiculous, made-up recipes, we would love to hear from you.  We will give you a hat tip in our forthcoming coffee table book on silly mint juleps named after horses*.

END_OF_DOCUMENT_TOKEN_TO_BE_REPLACED

I became a race horse owner on January 7th of this year. Okay, so it was one share of a horse named Tuesday Gal, purchased for just under $65 from the Thoroughbred Stock Exchange (TBSX), but still – I had access to the horse ownership experience.  And for someone who grew up in Saratoga Springs, NY, this was in many ways the achievement of a life goal.  I added Tuesday Gal to my Equibase Virtual Stable, closely followed the workout reports, and was thrilled when I got the email from TBSX that Tuesday Gal would debut on February 21st, in a maiden special weight on the Aqueduct inner track.  As the 21st approached, I got more and more excited and, on that Sunday – while on vacation in Florida – the family set aside time for the 9th race at Aqueduct.  I bet almost as much money on Tuesday Gal as I had paid for the one share in the first place.  The anticipation was exciting; the sky was the limit.

END_OF_DOCUMENT_TOKEN_TO_BE_REPLACED

The mint julep, while obviously a stellar drink in its own right, is nearly synonymous with the Kentucky Derby. When you are at the Kentucky Derby, there are vendors walking by constantly with souvenir glasses filled with ice (a lot), bourbon (a little), sugar, and rapidly wilting mint sprigs — and even those third rate juleps taste unbelievable on the first Saturday in May. 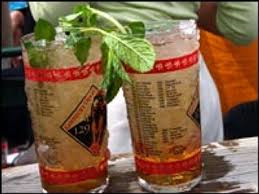 Most people won’t be enjoying the Derby on track at the Downs, however, and therefore we have continued our annual tradition of coming up with some Julep recipes inspired by this year’s crop of three year old colts.  Here are our ideas.  Let us know if you try any of them – and if you do, I wish you the best of luck.

END_OF_DOCUMENT_TOKEN_TO_BE_REPLACED

Welcome back to Horse Madness II, the quest for racing’s greatest Cinderella.  We have finally reached the Final Four, featuring four of the greatest upsetters in the history of racing.  We are just two days away from crowning a champion…

Our initial Final Four matchup is very enticing, pitting the greatest longshot in the history of the Belmont Stakes against one of the greatest alltime upsets at the Graveyard of Champions, Saratoga Racecourse.  Sarava beat Triple Crown contender War Emblem in the 2002 Belmont, whereas Jim Dandy beat Triple Crown champion Gallant Fox in the 1930 Travers Stakes.  Who will survive and advance to vie for the championship?  You decide…

END_OF_DOCUMENT_TOKEN_TO_BE_REPLACED

Welcome back to Horse Madness II, the quest for racing’s greatest Cinderella. Ironically, the bracket of upsets has been dominated by chalk, with all favorites advancing to the Elite 8. Some great matchups ahead, ripe with opportunities for upsets, so stayed tuned…

Today we have an epic matchup of huge upsetters in America’s two biggest races — the Kentucky Derby and the Breeders’ Cup classic.  One of our longshot contestants drove in the back of a van from Arizona to the Bluegrass of Kentucky, with a trainer who had a broken leg that seemed to take years to heal.  Our other contestant was an unknown European invader who traveled from France all the way to Santa Anita in order to take on the world’s best over a dirt surface he had never tried before.  Which upset was more impressive?  Who will be moving on to the 2016 Horse Madness Final Four?  You be the judge…

END_OF_DOCUMENT_TOKEN_TO_BE_REPLACED

We are reaching way back into the history books for the first of our contestants today, all the way back to the 1913 Kentucky Derby – and a horse that remains the longest shot to win the Run for the Roses. The second contestant is more recent, but an extremely unlikely upsetter nonetheless, taking the 1994 Breeders’ Cup Distaff at odds of 47-1.  The question is which of these competitors will be moving on to the Horse Madness Elite 8?  Which one was the bigger upset?

END_OF_DOCUMENT_TOKEN_TO_BE_REPLACED

Today’s matchup is one that features two horses that, in my opinion, would not have been nearly as long odds as they were if the races were held today. Arcangues, trained by the immortal Andre Fabre, came into the 1993 Breeders’ Cup Classic as a Group 1 Stakes winner over the grass at Longchamp. It was his first start on dirt, but he was absolutely forgotten in the wagering at 133/1. Of course, he won. Similarly, Charismatic came into the 1999 Kentucky Derby off of a win (with a 108 Beyer) in the Grade 2 Lexington Stakes, and with the services of Chris Antley and D. Wayne Lukas. Nevertheless, the wagering public sent him off at 31/1 – the third longest shot in a field of 19. Both of the races in the competition today are eminently memorable. But which one was the bigger upset?

END_OF_DOCUMENT_TOKEN_TO_BE_REPLACED

This is a good one. The longest shot in Belmont history versus the horse that ended Cigar’s streak. 70/1 against 39/1. A classic Tom Durkin call up against a classic Trevor Denman call. I am not even sure where I would start if I were voting.

Sarava was a $250,000 yearling, a son of inaugural Breeders’ Cup Classic winner Wild Again and out of a Deputy Minister mare. He began his racing career in England, but flamed out there and returned stateside to break his maiden in November 2001. He then came in second in three consecutive outings before finding the winners’ circle again at Pimlico in the Sir Barton Stakes. The connections took that win and jumped right into the deep end of the pool, entering the Belmont Stakes against War Emblem, who was threatening to be the first Triple Crown winner in 23 years. War Emblem did not particularly scare anyone away, however, as 11 horses made the gate, including Medaglia d’Oro and Perfect Drift. Of those horses, Sarava actually was not the longest shot on the board – Artax Too was 71/1 – but those two were by far the outsiders as far as the betting public was concerned. The rest of the field was between 3/2 (War Emblem) and 25/1. But weird things happen over a mile and a half – especially when the heavy favorite stumbles badly at the start. The call of the race was also quintessential Durkin, building to the last quarter mile (War Emblem is toiling!) and culminating with a surprised exclamation of Sarava! at the line, even though Sarava took over from Medaglia d’Oro with a furlong to go, and ground him down to the finish. Incidentally, Artax Too ran to his 71/1 odds, coming in dead last. Sarava did not run again as a three year old, and ran just once at four, coming in 6th in an optional claiming contest. He had a decently long campaign as a five year old, but it was clear that his best day was that warm day in June 2002 in Jamaica, Queens – he would never win again.

Dare and Go broke my heart as a kid. As a 13 year old, I didn’t have a great concept of betting value – I just wanted to watch a dominant horse. And Cigar was just about as dominant a horse as possible, and he was ridden by my favorite jockey, Jerry Bailey. He had a 16 race win streak coming into the 1996 Pacific Classic, and did not show any signs of letting up. In 1996 he had won the Donn, the Dubai World Cup, the MassCap and a stake race at Arlington. He was the overwhelming 1/9 favorite at Del Mar for the Pacific Classic, and it did not seem like anyone in that field could touch him. Unlike Sarava, however, Dare and Go was not an unknown or unproven commodity. He was a Grade 1 winner, having won the Grade 1 Strub Stakes in 1995. He had also garnered the place spot in three Grade 1 Stakes in 1994 – the Secretariat Stakes, the Hollywood Derby, and the Hollywood Turf Cup. Dare and Go was a legit horse, and in hindsight, he may have been rounding into form with a second place finish in the Grade 2 Bel Air Handicap at Hollywood Park the month before the Pacific Classic. It’s that Cigar was just such a monster at that time that it was inconceivable that he would lose. But if you’ll forgive the cliché, that’s why they run the races. Cigar was taken wide by Siphon on the first turn, and Jerry Bailey had to contend with Siphon, with David Flores aboard, on his inside and Dramatic Gold, under Corey Nakatani, on the outside. Knowing how overmatched their horses were, both Flores and Nakatani utilized some race-riding strategies against Cigar, and those took their toll. As Cigar finally put Siphon and Dramatic Gold away, Dare and Go was coming like gangbusters, and went by Cigar to an unthinkable upset, to the great surprise of both Trevor Denman and the giant crowd at Del Mar.

Here are replays of both races.

This is a great matchup, as it pits two different kinds of upsets against one another – an upset by a horse that seemed to not fit the race, and which featured unthinkable odds, against an upset by a good horse that just was up against one of the greatest thoroughbreds of all time.

Please place your votes on Twitter by retweeting for Sarava, and favoriting for Dare and Go.