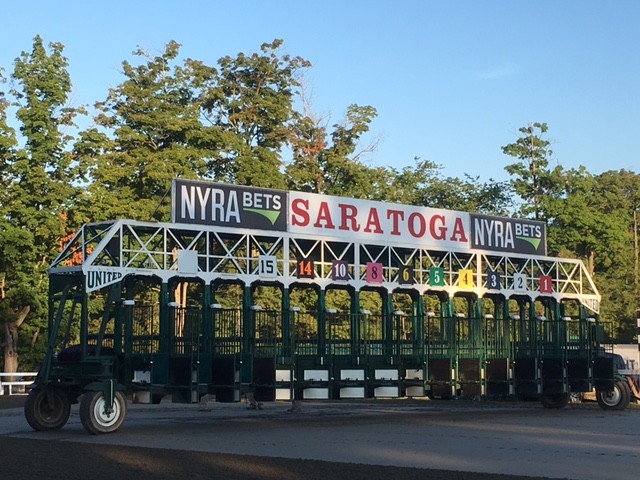 The peak of the Saratoga meet is undeniably the Travers.  The Midsummer Derby is the crown jewel of each racing season.  Not only does the race draw the best three year olds in training, but it also draws media buzz and crowds unmatched by the other 39 days of racing.  We have been attending the Travers for the past 20 years–after we finally convinced our parents we could navigate the crowds and chaos of the day.  We have made some great memories over those 20 plus years—getting Chris McCarron’s goggles at our first Travers after he guided Deputy Commander to a dramatic victory; assisting Kenny Mayne in hedging his bets prior to the 2009 Travers; and stumbling from Caroline Street to the turn styles the following year in order to reserve space for a friend’s bachelor party.  But in addition to the personal memories, we have also witnessed some unbelievable performances and photo finishes.   This week, we will recap a few of our favorite editions of the Travers from the past 20 plus years.

Our trip down Travers Memory Lane begins with one of the most “dramatic renewals of the Travers” in the race’s storied history; the 1998 Travers.

The 1998 Travers featured Victory Gallop, the 1998 Belmont winner and spoiler of Real Quiet’s Triple Crown bid, Coronado’s Quest and longshot Raffie’s Majesty.  Coronado’s Quest came into the race off four straight graded stakes scores, including the Dwyer and the Haskell Invitational.  He was known for his difficult temperament, which had earned him the nickname “The Bad Boy of Racing.”  Coronado’s Quest’s sire, Forty Niner, had also been a Travers winner, prevailing over Seeking the Gold (this Thorobro’s all time favorite horse) and Brian’s Time in a close three-way finish in 1988.  Raffie’s Majesty, my sleeper pick that day, was an outsider in the race, having been beaten by others in the race in both the Belmont and the Jim Dandy. 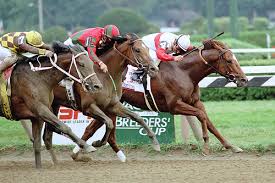 The race, which was won by Coronado’s Quest, piloted by Hall of Famer Mike Smith, in a three-way photo finish by the slimmest of margins, was perfectly narrated by the legendary Tom Durkin.  His call was pitch-perfect,  rising in a crescendo as Victory Gallop summoned one more bid and Raffie’s Majesty closed from far back  on the outside.  The call culminated with an iconic proclamation:  “Coronado’s Quest, Victory Gallop, and Raffie’s Majesty, three noses on the line in a dramatic renewal of the Travers!”

I recall jumping out of my seat as Jorge Chavez summoned Raffies’ Majesty for one last jump.  As it stood, I had the triple (which back then equaled a lot of Taco Bell), but I missed one of my biggest win bets to date, and an even bigger trifecta score when Raffie fell a few jumps short of winner Coronado’s Quest and runner up Victory Gallop.  Nevertheless, it was an unbelievable race and an even more memorable call from Durkin which I will never forget.