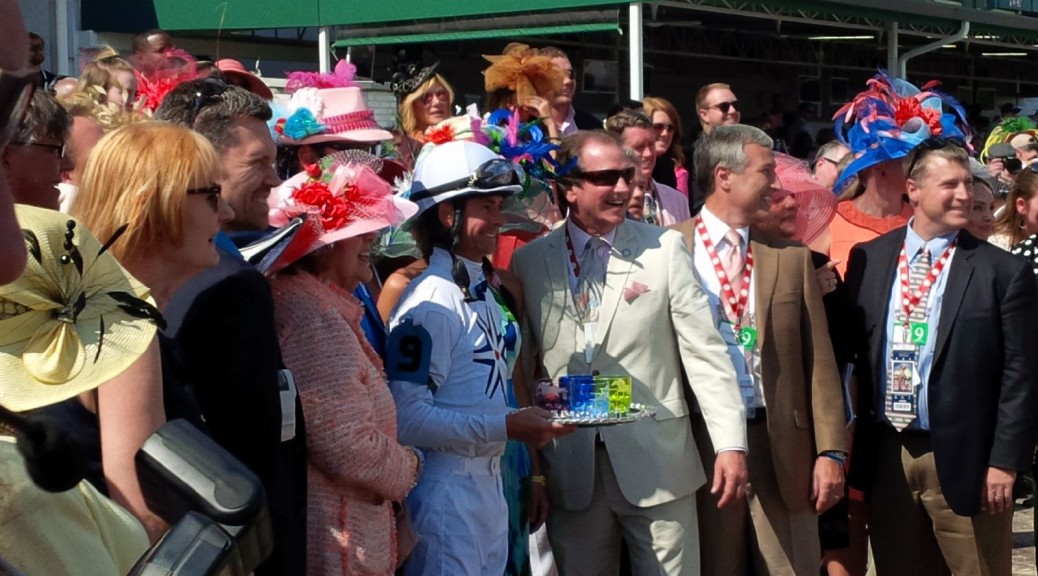 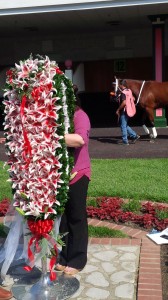 Bonus:  For those playing earlier in the day:

Now to our more substantive analysis of the all stakes pick 4 sequence.

Kentucky Oaks champ Shedaresthedevil returns to CD as the headliner for the La Troienne.  She is 3 for 3 at Churchill and 4 for 6 at the distance. She made a strong four year old debut and is now second off the layoff. Other speed in the race could compromise her, but she is a deserving favorite.

That said, we will likely use Dunbar Road as our top selection.  She is turning back a panel, and with a lot of speed in this race, figures to be closing hard late. She won off a similar rest last year (in a stakes at CD over the same distance).

We will also use Finite and potentially as an A depending on the tote board.  Her last effort can be excused because of the slop and her numbers before that were very competitive.  We like the outside draw as Santana can watch the race unfold before making a move (spoiler alert—we are banking on Santana and Asmussen having a huge weekend).

The Eight Belles is always an exciting race that is difficult to handicap as it features a number of lightly raced but promising fillies, many of which are going the specialty distance of 7 furlongs for the first time. The added removal of Lasix, where a large number of entrants have seemingly benefitted from it, further adds to the degree of handicapping difficulty.  This year’s edition is our favorite race on the card, not because we have some strong opinion on who will win, but largely because we can make a case for several double-digit to one horses as our top pick.

Caramel Swirl’s best two efforts have been sprinting, and she just ran a huge race at seven furlongs.  We like the outside draw for her as she can use her tactical speed to get good position and perhaps get first run on the field.  Obviously a tough ask to go from maiden ranks to a Grade 2, but Mott doesn’t usually throw horses to the fire this early unless he believes in them.  At 12-1, we think she’s a great value play.

Euphoric has eye catching speed figure numbers in her two 2021 starts.  Further, on the Ragozin sheets (a favorite handicapping tool of the Thorobros), the horse has never “backed up”, showing steady improvement in every start. She has been working well at CD since the last start, suggesting this was her plan all along. There is plenty of other speed signed on, but she should get the lead spot on the rail and save ground around the turn.  20-1.

Li’l Tootsie sports two strong numbers sprinting.  She now turns back and figures to benefit from a quick pace.  The last effort was bad and causes one to wonder if it was the distance or the lack of Lasix.

For the B team, we target some of the more logical horses, who have question marks and we suspect will be overplayed.  Again, we are looking at this race as potentially the big value race of the day, however, we will defensively use more logical horses like Dayoutoftheoffice, Kalypso, and Obligatory.

Nothing gets the beers flowing quite like a Friday night Turf Sprint.  If we are alive in horizontal wagers at this point, we’ll be cracking a few extra cold ones to deal with the added uncertainty caused by horses running 5 and half furlongs on grass.  That said, we do have a clear cut A team here that makes us (somewhat) confident.

We struggle with Diamond Oops because he often looks like a horse with no plan, sporadically trying turf in between dirt races.  Dirt to turf is not exactly a winning move for his barn.  However, Oops went dirt to turf in September, winning this race from off the pace. His last two dirt efforts were poor, so he got some time off and now returns on the turf. His running style fits and Geroux returns.

We close the A team with Fiya who has some of the fastest numbers in the race and figures to improve as a lightly raced four year old.  The time off has us somewhat concerned, and Albertrani is only 7% off the shelf.  That said, the horse just wins and has won fresh in the past.  Lots of other speed makes the task tough, but if any of the speed sticks around, it will be Fiya.

Just Might leads the B team.  The last effort was poor but the soft turf may be the excuse.  He also could have bounced off the huge effort two back.  Another horse we figure for the lead, but our top B team pick.  Also, if his odds reach double digits, we may add him to the A team.  Another B teamer to note is Ambassador Luna.  If the turf has any water in it from Thursday’s expected storms, we think she becomes a must use at 50-1(!).

Historically, the Oaks is one of our favorite races, and this year’s edition only solidifies our fondness.  It’s an extremely competitive race where arguments could be made for a number of horses in the field. Unfortunately, this is our second draft of the Oaks analysis as the first one heavily featured the 50-1 late scratch Ava Grace. The scratch of Ava Grace leaves the pace scenario more uncertain, but with a number of other horses who like to be forwardly placed, we still think the pace will be quick.

The two favorites—Travel Column and Malathaat –figure to be forwardly placed and are logical.  However, a look at Travel Column’s two route starts this year show a win and a fade to second.  The fade to second occurred during a faster pace. An extra panel and some increased pressure up front could make her vulnerable late. Malathaat is undefeated and has won graded stakes in New York and Kentucky. She did have a big effort last time and now needs to repeat it or improve on short rest.  Again, both favorites make sense, but both are vulnerable.

So with those question marks, we are looking for value on top and using Pauline’s Pearl, Crazy Beautiful and Pass the Champagne.  Pearl has improved her speed figures in every start.  Asmussen’s top pilot lands here, not on 5-1 Clairiere.  Champagne is very lightly raced but finished second behind the favorite in her first route.  Horses typically improve with their second route and she encountered some early trouble in that one that likely compromised her planned early speed. Crazy Beautiful has been consistent and is coming off a big effort.  Her running style should fit here and her work two back at CD was reportedly impressive.

Win or lose, we love this sequence and look forward to a Friday afternoon of pink wearing, race watching, julep drinking, and (fingers crossed) ticket cashing fun. Good luck, everyone!