Fair or unfair, the relevancy of racing is often measured by the television ratings generated by the Triple Crown series. And although the rise in popularity of the series over the past 15 years is evident from a look at the statistics, last year’s series–especially the Kentucky Derby–was viewed a disappointment. Maybe not disappointing when just simply looking at the numbers, but certainly a gut punch to those expecting  the “Pharoah Effect” boost to ratings. Similar to the Tiger Woods Effect, when golf ratings soared in 1998, following Woods first year on the tour, racing fans hoped for a bump in ratings attributed to the sport’s first triple crown winner in 37 years. 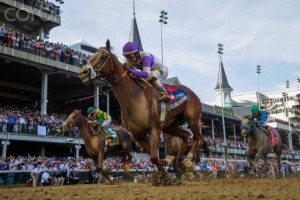 Instead of a boost, the Derby took a 14% hit, dropping from 16 million viewers in 2015 to 15.5 million in 2016. However, a look at the historical ratings for the Run for the Roses, suggests that the disappointment of a slight regression in the 2016 ratings is not a doomsday indicator.

In the 16 years that NBC has televised the race, last year’s Derby ranked as the 5th highest. It surpassed the 2014 broadcast and smashed the 2011 and 2012 ratings. 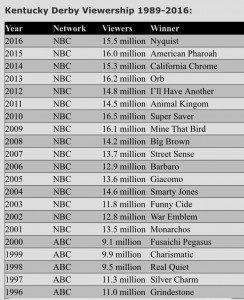 The other notable impact of the 2016 Derby was the effect it likely had on the NHL playoff broadcast that immediately followed. Game 5 of the Penguins/Caps second round series ranked as the second most watched non-Stanley Cup playoff game in the last 23 years. While that statistic itself may not make racing fans more optimistic, it surely was well received by NBC who seems more committed than ever to promoting and broadcasting racing (as evidenced by its 2017 Breeders Cup Win and Your In schedule that features numerous summer and fall races on the main network). As you can see from the statistics, the Triple Crown has flourished since jumping ship from ABC to NBC and it is encouraging for race fans to see NBC use the popularity of the Triple Crown to boost ratings from other sports.

But why the decrease in the 2016 ratings? It is pure speculation, but the drop in Derby numbers could also be explained simply by the date on which the race fell. Three times in the past 12 years the Derby has fallen on the latest possible date—May 7th. In all three of those instances the numbers have taken a hit—14.6 in 2004 to 13.6 in 2005; a huge falloff from the record setting 2010 year to 14.5 million in 2011 and last year’s drop. Conversely, the highest rated Derbys have fallen earlier in the month of May, 2010’s run was May 1 and 2015’s was May 2. Perhaps when the race falls towards May 7, there are more graduations scheduled. Maybe people travel for Mother’s Day or go out to a Mother’s Day eve dinner. Regardless of the reason, there does seem to be a drop off in ratings when the Derby falls on Mother’s Day eve. And the good news for racing is that last year’s Derby was by far the most watched edition of the race held on May 7th.

Looking beyond the Derby, the Preakness ratings did receive a positive bump, suggesting the slight drop in Derby ratings was more of an abnormality.   Although not recorded in the chart below, Exaggerator’s win in the slop averaged 9.4 million viewers, a big bump over American Pharoah’s victory, although slightly behind the ratings generated in 2013 and 2014. 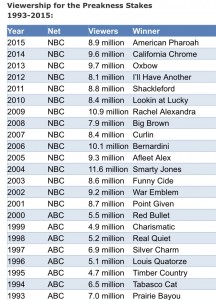 It will be interesting to see the ratings generated by this year’s Run for the Roses and Preakness. Many argue that this field lacks a true superstar. Perhaps that will hurt the ratings? Maybe there is some “Triple Crown Hangover”– Pharoah’s achievement of the impossible has removed some of the shine from the Crown? As a betting man, I would not wager on a decline in ratings. I’m betting on an increase in ratings, even surpassing 2015, using my angle of “bad trip” with the 2016 Derby falling on Mother’s Day weekend. Regardless of the final numbers, it is clear that since NBC has taken over the broadcast, although there have been some minor ups and downs, ratings have soared. The Derby is more popular than ever. Kentucky Derby parties are more prevalent than Memorial Day BBQ’s. The limelight shined on racing for these five spring weeks is brighter than ever.

@fatbaldguyracin @HR_Nation Butch the Blade has mastered some of the greatest track biases of all time. How about t… https://t.co/8GdDL6VBli
h J R
@Thorobros