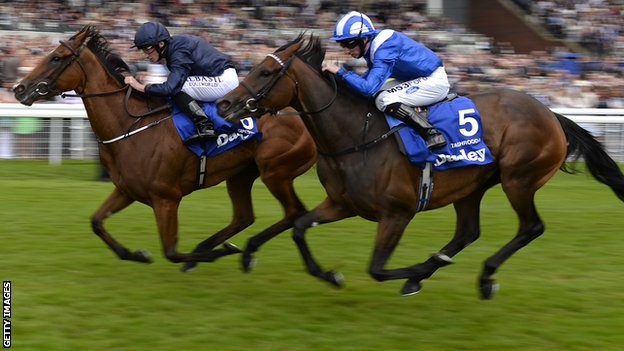 As we approach the 31st running of the Breeders’ Cup World Championships, each of us will analyze one potential contender per week that we think, based on their campaign and resume, fit the profile of a Breeders’ Cup winner.

In anticipation of next weekend’s QE II Challenge Cup at Keeneland, today’s BC Profile examines “Win and You’re In” Qualified and Filly and Mare Turf Contender Tapestry.

Tapestry won her way into the Breeders’ Cup F+M Turf, by taking the  2014 Darley Yorkshire Oaks at 1 1/4. The Irish-bred 3yo beat older mares that day, including Taghrooda who  went to post as the favorite this past Saturday in the Prix de l’ Arch de  Triomphe.

Tapestry also ran in the Arc, finishing 13th beaten 7  1/2 lengths. However her connections of owners Smith, Magnier and Tabor and trainer Aiden O’Brien must have been happy with her form, as she was supplemented to the race for $120k Euros.

She has only raced in Group I races this year. Having danced every dance, this horse will not face a step up in class as will many others in this field. In fact, this field could actually be considered a class relief for her.

However, the question remains whether she has already given her best this year. Although she owns a WAYI, expenses paid trip to Santa Anita, her connections have been mum on whether she will attend.

But a deeper look at her races indicates that her connections should most definitely consider it. Tapestry has run at the 1 1/4 mile distance three times in her career. Those include a win in the Yorkshire Oaks, a game second, by a neck, to Bracelet in the Irish Oaks, and most recently the 13th place finish in the Arc. She appears to be less effective at shorter distances, where her remaining races have been contested.

Tapestry also fits the bill for many of the key statistics of past winners of the race. She is foreign-bred, along with 9 of the previous 15 winners. She also has a win at the distance this year, and a win in a Group I. She also is a European 3 year old, which have accounted for 3 out of the 6 European-campaigned victors of the F+M Turf, including Midday in 2009.

Keep an eye out for Tapestry if she runs at this year’s Breeders’ Cup. She might fit the ‘other-Euro’ angle, as many will be focusing on Dank’s attempt to repeat in this race.